From Salon Owner to Coca-Cola Scholar: Why One Mom Sold Her Business to Chase Her Academic Dreams

Rebecca Ramos was running a nail salon in Las Vegas. On paper, she had recognizable signs of success: her own house, good kids and a thriving business. 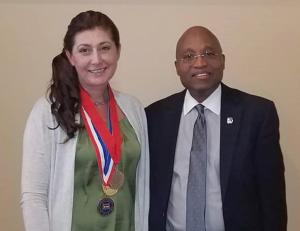 But when her brother died unexpectedly, everything changed. His death, brought on by inner turmoil, shocked her.

“I got rid of everything,” Rebecca remembers. “It seemed so superficial. I was like, ‘This is not what I want to do in life.’”

Rebecca moved to Colorado, and with guidance from her son and daughter, now both adults, she applied to Community College of Denver (CCD).

The English class that changed her career path

Rebecca grew up in Las Vegas. Though she was an excellent student and dreamed of going to college, she dropped out of high school at 15 and earned her GED a few years later. Her dream seemed out of reach.

“I struggled for direction coming from a broken home,” Rebecca says.

Now, with her kids standing on their own, there was no better time. She got accepted to CCD and began in the veterinary technology program.

Her first semester, she took a requisite English class.

“I started falling in love with writing,” Rebecca remembers. “So then, I started pushing towards journalism.” She becomes sheepish. “I found out I’m a really good writer.”

“At first, I felt like, ‘I can’t do this,’” Rebecca says. “But the more I accomplished, the deeper I wanted to go. Things started becoming more possible.”

In her two years at CCD, Rebecca became editor-in-chief of the student magazine, Program Director for CCD’s Society of Professional Journalists and Executive Vice President of Phi Theta Kappa (PTK), an honor society for students of two-year colleges.

Nicholas Morris, Rebecca’s journalism professor and PTK advisor, encouraged her to apply for the Coca-Cola Scholarship — and she won. She was awarded the $1,000 bronze scholarship — one of just three individual awardees in Colorado — at a scholarship luncheon in March.

“I’m overwhelmed with gratitude,” Rebecca says. “Sometimes I ask myself, ‘Did I really do that?’ It’s hard for me to come up with words.”

Rebecca completed her associate degree from CCD and is now pursuing a Bachelor of Arts in Psychology from University of Colorado Denver, a stepping stone to earning either a PsyD or PhD. Eventually, she wants to become a forensic psychologist so she can help young people who are caught in the justice system.

“Looking back, I could have easily gone a different direction at 15 or 18 and I didn’t,” Rebecca says. “I know that there’s other young people struggling to make the right decisions with their life. I would like to be there for them.”

About the Coca-Cola Scholars Foundation

The Coca-Cola Scholars Foundation supports two-year colleges through the Coca-Cola Community College Academic Team Program, administered by PTK. The Program awards 200 stipends annually across four tiers of recipients in varying amounts, ranging from $1,000 to $1,500. Student are awarded based on GPA and school and community involvement.