German Student Finds Her Stride at Community College of Denver

Alisha Nikodemus did not do well in high school.

Born in a small town in Germany, Alisha clashed with her educational environment; perhaps it was the teachers’ personalities, she explains, or what she calls her “laziness.” Whatever the reason, one thing was clear: her school system wasn’t working for her.

Alisha’s grades were low and that discouraged her from going to college. She graduated high school at 16 (normal for students who don’t attend college) and entered the workforce with an apprenticeship as a website designer.

After two years, Alisha realized it wasn’t what she wanted to do. Unfortunately, in Germany, once you decide not to go to college, it is nearly impossible to change your path.

Looking for a second chance at a career by way of a college education, Alisha set her sights on the United States.

Family friends from Pueblo, Colorado, offered Alisha a free place to stay so she could try community college. Because she had dual citizenship, Alisha could attend college in the States without a student visa (international students can apply for visas to attend community college).

“I thought, why not?” Alisha remembers. “It was a new opportunity to see if that was the right direction.”

“Right from the start, the American school system just worked for me,” Alisha says. “I realized I can do this and can do better if I work hard.”

To get into Pepperdine — now her dream school — Alisha would have to make up for not having an American high school education and what she calls “problems with her German diploma.”

After a successful summer in Pueblo, Alisha looked for schools that would help her fill her education gaps. Community College of Denver (CCD) seemed the best path to success, so Alisha moved to Denver.

Making up for Lost Time

With CCD’s support, Alisha set about becoming the ideal student to Pepperdine. She aimed for a high-grade point average and joined many extracurricular activities.

“I had to do what people do in four years of high school in two years of community college,” she says.

At CCD, Alisha gravitated toward her professors’ passion for teaching and for their subject matter.

“Whenever I entered a new semester and new class, they always seemed enthusiastic about what they were doing,” Alisha says. “I can honestly say that in the two years I’ve been here, I’ve never had a bad teacher.”

Because class sizes were small, professors could focus on students more; Alisha thrived from the one-on-one attention and achieved her goal of earning a 4.0 GPA.

To build up her extracurricular activities, Alisha interned for college credit with the student newspaper, The Star Journal of Excellence, then became its editor-in-chief. She joined three honor societies and was an officer for one of them. 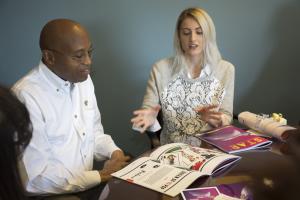 In December of her second year at CCD, Alisha applied to Pepperdine, with a letter of recommendation from CCD’s President, Dr. Everette Freeman, whom she had come to know working with The Star.

In March of 2018, Alisha received the letter of congratulations; she was accepted at Pepperdine University!

Alisha will begin classes there in August, where she will finish six credits for CCD — part of a reverse transfer program — to obtain her Associate of Arts degree. She estimates spending another three to four years earning her bachelor’s degree.

One day she hopes to be a film or television producer or maybe a scriptwriter. With Pepperdine’s location in the Los Angeles area, and its connections to Hollywood, Alisha is excited about the opportunities it will afford her.

No matter where her life takes her next, she credits CCD for helping her get there.

“I think you have a lot of opportunities here,” Alisha says of CCD. “They all helped me and they will help you too.”