Diana Freyta is big on family values when it comes to education. 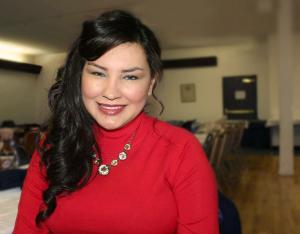 Not only is the Community College of Denver (CCD) sophomore successfully juggling college as a single mother while working full time, she’s attending despite an earlier family history that might have prevented her—and others in her family—from attending college at all.

That is because Freyta and other members of her family are “displaced Aurarians”—descendants of family members who lived in the Auraria neighborhood, before being uprooted to make way for what is now the Auraria campus.

“My great-grandparents were displaced,” says Freyta. “They had to move themselves and their 12 children so the campus could be built. It’s hard to rebound from that kind of thing, but they did it, and moved to 9th and Mariposa where they stayed until they died.”

That history made Freyta’s family work even harder to send as many family members to college as possible—and it’s what prompted her to apply for a Displaced Aurarian Scholarship.

The Displaced Aurarian Scholarship program is designed to provide funds for tuition and fees for students who were residents of the Auraria neighborhood at the time the campus was first built, between 1955 and 1973.

The program extends to the children and grandchildren of any displaced residents. Many of Freyta’s family members have taken advantage of the program, including four sisters, several aunts, an uncle, and her mother – all of whom are recipients of the scholarship and now have degrees from CCD and their subsequent four-year college enrollment journeys.

“I’m the last generation to receive this scholarship, so I’m beyond grateful for this assistance,” she says. “No one knows better than me how hard it can be to pay for college and support a family on your own. This scholarship covers my biggest college costs like tuition and fees.”

She is grateful to honor the high value her family has always placed on higher education. Her 72-year-old grandmother, Maria Gallegos-Freyta, still encourages Freyta in her studies. Not only that, Grandmother Gallegos practices what she preaches.

Gallegos is also a Displaced Aurarian Scholarship recipient who currently attends CCD as an accounting major. She even shares some classes with her granddaughter.

“Age was never a deterrent when it came to getting an education in my family,” Freyta says.

Who knows? Freyta’s grandmother just might join her there as well!