"There’s a common fear among veterans after they leave the military," explains Trevor Wichert, alumnus and now veteran services coordinator at Community College of Denver (CCD).

After they return from service, having performed purposeful jobs like medical care or ground logistics, they worry they won’t be as fulfilled in civilian life.

Wichert offers advice for such veterans: take advantage of the GI Bill and go to college — especially at a school like CCD, whose programs align with military jobs. These might include the nurse aide program, information technology and anything at the Advanced Manufacturing Center, Wichert says. In some cases, veterans can get retroactive credit for the jobs they had in the military.

“Every single veteran works for their GI Bill from the moment you sign up,” says William Washington, a veteran of the U.S. Navy and recent CCD graduate. “This is one of the few times the government will give you money to make your life better.”

Many veterans join the military after high school, so re-entering school after being away for so long can be an adjustment.

“They’re scared that they won’t fit in,” Wichert says, “or that they might fail. I tell them to show up, be on time, pay attention in class, do what you’re told. Those are things the military teaches you. As long as you do that, you’ll succeed.”

At CCD, class sizes are small and professors have a reputation for giving attention to each student.

“I feel like I got a better education here than at other colleges,” Wichert says. “The teaching made my experience great.”

Wichert entered the Navy after graduating high school; after the military, he wasn’t planning to go to college but changed his mind after learning about CCD.

“Best decision I ever made,” he says. He graduated in 2016 with an Associate of Arts degree with a designation in philosophy. 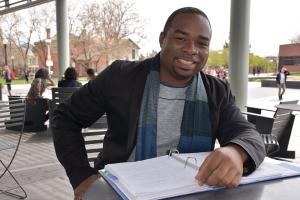 “If you go into the science building, you see posters of student projects,” he says. “That’s kind of how a parent will put a kid’s drawing on a refrigerator. I am glad I went to CCD because I know that professors care about the students.”

After finishing his military service, where he worked on launch and recovery of naval aircraft, Washington worked in the energy sector, then settled in Denver.

“I chose CCD because I was not up to par,” Washington says. “‘Let’s restart,’ I said. Build back into it.”

William graduated from CCD in 2018 with an Associate of Science degree. His hope is to go to a four-year engineering university in Colorado.

The Veterans Program at CCD

“We take really good care of our veteran students,” Wichert says. “We get them in touch with the right people and help them use their GI Bill. We’re a one-stop shop for them.”

Wichert is helping build the program on the Auraria Campus with a big focus on culture and community. He rallies the campus vets to march in the Denver Veterans Day Parade and organizes Fourth of July parties and other group outings, such as going to Top Golf.

In the future, Wichert hopes CCD will build a center for veterans with an exclusive, on-campus lounge where veterans can hang out, learn more about their benefits and help each other with homework.

“Having an experienced peer like Trevor help veterans is a huge advantage,” Washington says. "He knows what it’s like to be in their shoes, understands certain frustrations of navigating the system, and gives personalized attention to each veteran —  a service that larger veteran programs might not be able to offer.

“It can be challenging being around people who have never been around the military,” William says. “A civilian is not going to understand how to take that on. With the veterans we have on campus, I feel like we have a community here.”