In October 2015, her marriage broken, Kelly Shanley moved with her two young children to Warren Village, a nonprofit that provides safe, affordable, transitional housing and resources for disadvantaged, single parents. She began taking college classes in January 2016 through the organization’s College to Career Initiative (C2C) partnership with CCD.

“Through College to Career you take CCD classes in a familiar environment while your kids are in the Warren Village, on-site learning center,” Shanley says.

Those classes encouraged her to apply to CCD’s highly selective Dental Hygiene program because she wanted to help people and knew that associate’s degree would land her job security along with the salary necessary to survive as a single parent in Denver.

Surprised to be accepted, Shanley moved with her children into permanent housing and began taking classes in summer 2018. But despite excelling in prerequisite classes, she struggled.

“I was dealing with emotional trauma from my childhood,” she explains. “My son had not yet been diagnosed with his developmental delay, so I was sleeping on the floor outside his room because he would wake up in the middle of the night and leave the house.”

She hadn’t dealt with the issues she faced, just covered them up, thinking they would go away on their own.

“I didn’t address the trauma I had gone through,” she says. “I had failed to focus on rebuilding my confidence or self-worth. Instead, I continued moving forward (too afraid to stop) but with no real direction in mind. After being pushed down for so long, I was scared to make my own decisions. I let others influence the path I chose because it felt safe. Instead of addressing my issues, I used awards and good grades like crutches and band-aids.”

Late in the fall 2018 semester, exhausted and struggling with self-esteem and the pressures of single parenthood, Shanley withdrew, underwent therapy and focused on regaining her emotional health and direction.

“I had lost every form of income in one giant swoop — my scholarships, work-study and the stipend I received for my work in student government.”

An officer in CCD’s Phi Theta Kappa (PTK) international honor society since early 2018, Shanley received unconditional support from her officer team. “I stuck around and they let me. There was no way they were going to allow me not to come back to school,” she adds, laughing. 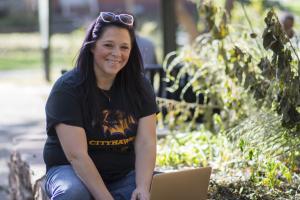 Determined to return to school, Shanley made the drastic decision to change her career path and pursue an associate degree in communication.

“I think my heart wasn’t in it. I was teaching scholarship classes and volunteering at Warren Village and it just clicked —'why can’t I make this a career?’ I wanted to help other single-parent students who are facing barriers like finding childcare and not having enough money for books. I thought that a degree in communication could help me find a job at CCD after I graduate that would help me do that.”

Reenergized, Shanley reenrolled in Spring 2019 and became president of PTK that summer. When Assistant Communication Professor Brian Weaver took over as the new faculty advisor that fall, “I told him we were meant to be a student-led organization,” she says. “We wanted to have as much autonomy as possible, to try things on our own, even if that meant failing a little so we could learn.”

Professor Weaver wholeheartedly agreed and vowed to support that goal.

In 2018, Shanley worked for PTK on the Relay for Life, a community fund-raising event to support the American Cancer Society. When the event was canceled for lack of support in 2019, she rallied students to push harder and ended up raising $3,000.

“We signed up to bring school supplies to children and reached out to every student organization on campus for volunteers,” Shanley says. “I started thinking ‘why are all these separate student organizations doing these little projects when we could join together?’”

The recognition led to the creation of “Students for Collaborative Change,” enabling students to volunteer through the Mile High United Way website and have their service hours tracked.

For its 5th star, “Honors in Action,” PTK partnered with Community Resources, Inc. (CRI), an organization that works directly with Denver Public Schools to provide needed resources. PTK students judged a science fair, volunteered for family nights and other events and conducted research on the impact of such interactions.

Shanley’s decision to change her academic/career path and follow her heart has more than paid off. She was recently selected as one of 20 out of 2,000 applicants for the 2020 All-USA Academic Team. She also landed the New Century Transfer Pathway Scholarship, awarded to the highest-scoring applicant in the state of Colorado, and will receive $7,250 in scholarships.

She intends to enroll in Metropolitan State University in the fall of 2020 to earn a bachelor’s degree in communication.

“I plan to come back to CCD to work as a recruiter, support services advisor, or as part of the CCD Foundation,” she says.

She dreams of becoming Professor Weaver’s co-advisor of PTK.

Shanley credits CCD and PTK for her outstanding success, along with support from Warren Village, Foundation donors, and scholarship programs such as KEYS, WISP, Women with a Cause and the Denver Foundation.

“None of them ever gave up on me,” she says. “CCD and PTK always supported and pushed me to become the person I am today. I want to keep giving back to CCD and PTK.”