Students like Jenna Duke and Zada Herrera are learning how to make their dream careers in journalism a reality through CCD’s journalism transfer degree program. 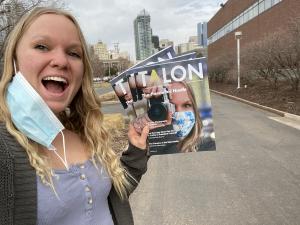 “I’m staring at a couple of vintage issues right now,” she said. “My favorite is fall 1969, with an article on John Steinbeck. I’m interested in writing that has stood the test of time.”

Duke first dreamed of a career in journalism as a child when she wrote, produced, and delivered her own neighborhood newspaper. After graduating from high school in 2016, this Iowa native followed in the footsteps of other great writers trying to see and make sense of the world. She traveled extensively and even worked at a national park. In 2020, she made her way through a global pandemic to the media capital of the West, Denver, to embrace the opportunities CCD offers in writing and editing.

“Usually there’s one EIC but Zada and I were both interested in the position, and it’s been great sharing ideas and working together,” Duke said.

Contributing to a Magazine’s Soul 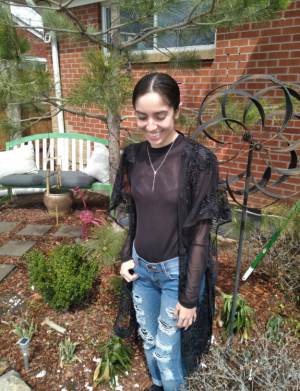 Zada Herrera has always had a sweet tooth for journalism. As a child, she enjoyed reading magazines and relished watching journalists interview people on CNN, imagining herself one day holding that microphone.

Herrera learned about the Talon EIC position while taking Schaefer’s “Feature and Magazine Writing” class. “It was such a great opportunity,” she said.

Her experience on the Talon Magazine has exposed her to the various roles that journalists play and challenged her to transcend self-imposed limits. “It pushes you and gives you different options,” she said. “I’ve gotten so much guidance, support and experience.”

Working on the Talon has also boosted her confidence. “I used to be more closed up and couldn’t imagine myself interviewing someone for an hour,” she said. “I’ve grown so much.” Shortly after starting with the Talon, Herrera interviewed then CCD President Everette Freeman last fall for a noteworthy feature article on his retirement and legacy at CCD.

She finds working on the Talon exhilarating. “Everybody is aligned through their element,” she said. “Jenna loves writing and is great at it. I love interviewing. We work with all the people from graphic design to make this magazine.”

Duke agrees. “I wrote a piece that’s in Talon’s Spring 2021 issue about CCD’s Ourglass literary magazine called ‘A Magazine’s Soul.’ I believe that magazines have a soul made up of all the individual pages written by multiple people that contribute to the whole. We care so much about it and love bouncing ideas off each other.”

Both Duke and Herrera credit Schaefer for encouragement and direction. “He goes out of his way to help you,” Duke said. “He’s answered all my lengthy emails about what I want to do with my life and helps me think through pieces I’m writing.”

Through Schaefer and their role as EICs, Duke and Herrera joined the Society of Professional Journalists (SPJ), a national journalism organization devoted to helping young aspiring journalists develop their journalistic abilities.

“I got on the Student Trustee Council as one of nine students in the country,” Duke said. “We have students from all these top universities. I told Dan before my first meeting that I felt like a huge imposter. He told me ‘You know your abilities.’ He reminded me of why I’m doing this, why I love journalism.”

“The most rewarding part of being an advisor is when students start imagining on their own,” Schafer said in an email interview. “We are changing what could be possible. We have adopted a firm, newsworthy focus for each semester. We have also become really interested in raising the journalism bar by executing in-depth interviews and profiles with prominent individuals. It has been so rewarding to see the soul of this magazine grow as these students share their energy, take ownership and imagine their magazine as it could be.”

In the email interview, Schaefer called CCD’s metamorphosis last year from a certificate to a journalism transfer degree program, “A big deal!  We wanted to offer a firm foundation to align our program with four-year university transfer programs in Colorado and meet the high demand for media professionals in journalism and public relations.”

Herrera plans to earn an associate’s degree in journalism at CCD and a bachelor’s at a four-year college, eventually working in broadcast, print or digital journalism.

Duke plans to earn an associate’s degree in English from CCD while taking as many journalism classes as possible, transferring to a four-year college and eventually becoming a magazine editor.

“I still love the outdoors so maybe working for an outdoor or travel magazine,” she says. “But I keep staring at The Paris Review. Maybe I could become an editor there someday.”