CCD’s journalism department is excited to announce the fall edition of The Star Journal of Excellence won three awards at the Society of Professional Journalists (SPJ) Mark of Excellence Awards, which honor the best in student journalism. CCD faced tough competition and went up against four-year colleges with full journalism degree programs.

CCD was one of only three community colleges to win in the competition where two- and four-year schools competed against each other. 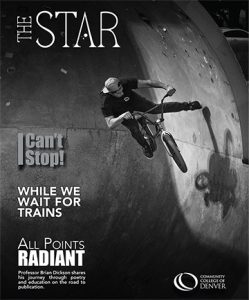 The Star Journal of Excellence

Winners were announced at the SPJ Region IX annual conference in April.

CCD’s Journalism Department produces the The Star Journal of Excellence, a digital collection of articles, photos, and essays produced, designed, and distributed by CCD students.

Awards & Accolades, Musings on the Arts