Seventy-five local students enjoyed an adventurous day learning how to be a journalist.

On June 11, 2015, CCD’s Journalism Department participated in the Denver Post’s (DP) Journalism Youth Day. Each year, DP invites local 8- to 14-year-old students to spend a day learning about what it takes to be a journalist. This year there were 75 local students from a variety of schools involved in the day. This was CCD's fifth year attending and our students acted as team leaders.

The day was packed with real-life interviewing around town. First, the students met with professional writers, photographers, and editors to learn about jobs, duties, and deadlines. Later, students split into small groups with assigned team leaders and each team was assigned a story. Within their groups, the students took three hours to conduct interviews and take photographs in various areas around Denver, including the state capitol building and Denver Public Library. Groups met with such local celebrities as children's author Jeffery Bennett, professional photojournalist Brent Lewis, sports columnists Woody Paige and Les Shapiro, and DPTV broadcaster, Molly Hughes. After the interviews were complete, the students raced back to the DP to write a story. All of the stories and photographs were published at the end of the day in DP’s Colorado Kids issue. 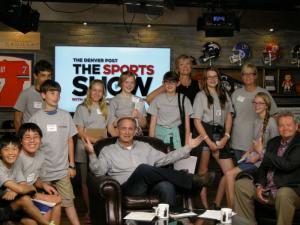 But before that could happen, the students were gathered in the DP auditorium where their proud parents and family members listened to each group describe their interviews and stories. These parents and family members were thrilled with all that their children had produced. As the day ended, moms and dads thanked CCD team leaders and expressed how amazed they were at all that they accomplished in one day. 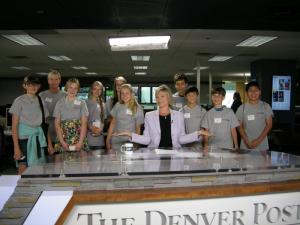 Local students with DPVT broadcaster, Molly Hughes in the studio.. 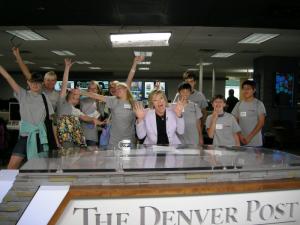