This article and images are courtesy of Alicita Rodriguez, University Communications for CU Denver

How do the four leaders view the campus’ historic moment? “I’m proud of this herstory that’s happening in Denver,” DeSanctis said. Marks also feels honored to be part of this milestone, especially because it indicates a shift in higher education: “We have a unique educational history with three institutions of higher education located on the same campus. All of our students, faculty, staff, and alumni benefit from this collaborative learning model, in part because the Auraria Campus reflects the diversity of our community—a diversity that includes women at all levels.”

Davidson, a graduate of the Air Force Squadron Officer School and the first woman to fly the Air Force’s tactical C-130, stressed the diversity of women leaders: “There are still stereotypes about the woman leader and, ironically, they’ll all over the place, both positive and negative … Women can be any way they want—you have to find your own style.”

Walker pointed out that women in leadership roles are still a minority. “Female leadership is still underrepresented in the highest ranks in this country. In the C-suite alone, only 21% of executives are female and only 4% are women of color,” she said. Walker believes female representation needs to extend to the field of higher education as well. “I studied engineering at CU Boulder and got my MBA from Harvard, two fine universities—and the lack of women in leadership was striking,” she said. Davidson thinks the current AHEC leadership is a step in the right direction: “It represents that women are starting to get into leadership positions, and it’s starting to seem normal.” 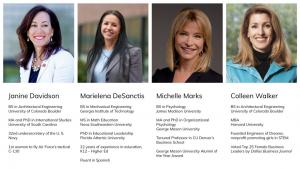 What About Women’s History Month?

All four leaders agreed that Women’s History Month remains necessary, particularly because it’s a way to recognize the women throughout history who have fought for equal treatment under the law and in society. “It’s easy to forget how far we’ve come,” Davidson said, a thought that was echoed by DeSanctis. “It’s important for young women to understand that things as they are today weren’t always like that—they are standing on the shoulders of giants,” DeSanctis said.

Marks wants to honor women who broke through barriers. “Ruth Bader Ginsberg was one of my heroes,” she said. Of the late Supreme Court Justice’s many powerful statements, Marks repeated this one as being significant to her: “The worst times were the years I was alone. The image to the public entering the courtroom was eight men, of a certain size, and then this little woman sitting on the side. That was not a good image for the public to see.”

Interestingly, the leaders said their own mothers served as role models. Walker, who stressed that women should be the CFOs of their own lives, said, “My mother could stretch a dollar ten ways from Sunday.” DeSanctis said that whenever she feels overwhelmed, she thinks of her maternal grandmother, who sent her daughter (DeSanctis’ mother) away from Cuba to a foreign country all by herself. “It took four years for them to be rejoined,” she said.

Walker recounted a powerful anecdote about her own college experience. As an undergraduate student at CU Boulder, when she met with her engineering academic advisor for the first time, he informed her that she had come from a second-tier high school in a second-tier city (Pueblo, Colorado). “He said, and I’m quoting, ‘Honey, I just don’t think you’re going to do very well here.” Admittedly, Walker was less prepared to study engineering than some of her classmates who had taken AP classes, so she needed her mother’s encouragement to help her through that moment. “What’s the moral of the story? Don’t listen to people who don’t have a vested interest in your success.”

DeSanctis, who has experience as an educator and administrator in both K12 and higher education, said, “It didn’t take me long to understand the power of authentically caring for my students and for my colleagues … That empowers people.”

Marks, who has never had a female supervisor, wants to use her position to empower others. On a grand scale, she wants to empower students through equitable access to higher education. On a smaller scale, she’d like to empower her own team. “Empowering means giving power; it’s the opposite of micromanagement,” she said. “When you have a great team, you don’t have to be involved in every decision.”

Davidson, who comes from the military where collaboration is paramount, admits “empowering people is not as easy as it sounds.” In her current role, she tries to explain how she sees a problem, and then elicits other opinions. “I want to lead with context, not control,” she said.

Davidson, DeSanctis, Marks, and Walker addressed the current state of higher education, as well as the biggest challenges for the next generation of women—and these questions revealed their passion for education.

Marks emphasized educational equity. “If I had to give an hour-long lecture without preparation, I would talk about the importance of equitable access to higher education,” Marks said. “A college education remains the primary driver of social mobility … The country has grown in population and has diversified; the purpose of higher education needs to shift along with needs and values of our country.”

Davidson shared her own college story to illustrate that students should follow their passion. Because her Air Force scholarship required it, she studied engineering as an undergraduate. “I was not very good at engineering,” she said. So when she decided to leave the military and go to graduate school, she chose to focus on what interested her most. “My dad kept saying, ‘What are you going to do with a degree in international relations?’ I don’t know, but I know people do stuff in this field,” she said. Davidson went on to work as the 32nd undersecretary of the United States Navy at the Pentagon in Washington D.C.

DeSanctis spoke about how the pandemic has intensified gender inequities. “I’m incredibly concerned about the future impact of the COVID-19 pandemic on women,” she said. “Disproportionate numbers of women have been forced to leave the workforce, put their higher education on hold, step away from their research because they were thrust into caregiving.”

When Walker was asked what do you believe will be the biggest challenge for the next generation of women, she didn’t pause. “The same challenge we have today: the caregiver challenge,” she said. “We have these brilliant minds in 50% of the population and they happen to be the child bearers and the caregivers. It’s very hard to move up in rank and responsibility when there isn’t childcare—and the fundamental societal function of childcare is elusive to us as a country for some reason.”

November 16, 2021
YMCA of Metro Denver and Community College of Denver Partner to Give Students Health and Wellness Career Pathways