Denver Scholarship Foundation (DSF) recently named Community College of Denver (CCD) their 2017 College Partner of the Year for their increased success and retention of DSF scholars.

CCD was recognized for creating innovative programs to support DSF scholars, which was evidenced by the college’s six percent increase in DSF scholar retention and completion this past academic year.

A dedicated resource center model to support students with wraparound services such as the Urban Male Initiative (UMI) and Women Intentional about Success & Excellence (WISE) programs have contributed to student success.

Another contributor to program success is the partnership with the Students-Empowered-Educated-Determined (SEED) program, one of the most successful programs of its kind. Made possible by the Mordecai Family Foundation, SEED was designed to help students on their path to a bachelor’s degree on the Auraria Campus—starting at CCD and transferring to Metropolitan State University of Denver or the University of Colorado Denver. 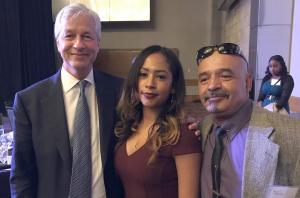 For Selena, higher education was not only a stepping stone to a career, but it also empowered her to change the course of her future. Growing up through a turbulent family life, Selena learned to take on adult responsibilities from an early age. In spite of these challenges, and with the encouragement of her mentor, Nikki, Selena became determined to graduate from high school in three years. She did just that.

“We all have that little voice in our head that sometimes says that we can't make it—that the pressures are too great,” Selena said, “but I kept my mind focused on that pressure. I put all my energy into my academics, and it has not failed me.”

At the age of 16, Selena enrolled at CCD. Inspired by Nikki’s mentorship and motivated by her dreams of helping her family, Selena joined the SEED program. The SEED program helped to pave a path for Selena—along with many other DSF Scholars—to transition seamlessly from CCD to a four-year college. At CCD, she earned a 3.9 GPA, was a member of the Phi Theta Kappa (PTK) Honors Society, and transferred to Metropolitan State University of Denver in the 2017 fall semester. Selena plans to earn a bachelor’s degree in psychology and hopes to pursue a career in counterterrorism.

Selena and CCD were formally recognized at the DSF Graduation Celebration, where VP for Academic Affairs & Provost, Dr. Rhonda Epper, accepted the award on behalf of the College.

“I am so proud of CCD alumna Selena Ordonez,” said Dr. Epper. “She has overcome many obstacles but has stayed the course. Her persistence and determination are paving the way for a great future. Our continued thanks to the Denver Scholarship Foundation for their continued support of our students!”

Nathaniel Easley, DSF’s former Chief Executive Office shared, “We are honored to call CCD our partner and would like to congratulate them for the strides they have made towards ensuring the success of our Scholars.”

August 12, 2021
Community College of Denver Awarded USDOL Grant to Close the Skills Gaps in IT Careers