Tania Lopez is a right brained and a left brained type of person.

As a child she channeled her inner bohemian with paintings, drawings, photography and other visual arts genres. But, oddly enough, she also had an affinity for all things science related.

“I’ve always loved to dabble in the arts, but I was just as interested in science, technology and other topics that explain the dynamics of life,” she says. “My favorite scientific subjects are physics and genetics as well as biology and astrophysics.” 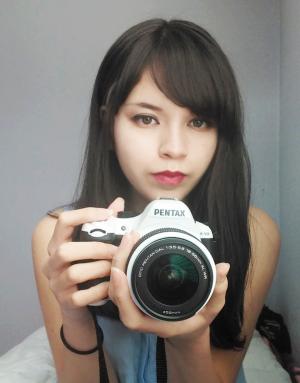 Today, the self-described geek and recent Community College of Denver (CCD) graduate has not only found a way to merge her interests, but has also garnered two awards of recognition for her art in the process.

Lopez, who received her degree in Graphic Design from CCD in May, won first place in two categories of CCD’s Student Art Show competition in the area of visual arts.

She won first place for a portrait of her friend’s oil painting titled ‘Ziko’ as well as for her magazine cover and table of contents designs for a magazine concept she dubbed, ‘Genius – Mad Science.’

“This has been a pretty exciting year for me,” she says. “Creating the magazine, graduating, and winning these awards has been a gratifying realization of several dreams at once.”

Earning scholarships has enabled Tania to nurture her dreams through in-depth studies at CCD.

“The College Success and Western Scholarships helped me pay for the supplies I needed to complete my studies as well as tuition,” she says. “Even though they (the scholarships) didn’t cover everything, every little bit helped me reach my goals and graduate.”

Now that she has completed her studies at CCD, Lopez, 25, has her sights set on landing an entry-level job in graphic design and on enrolling in a four-year college in the near future.

“I’ve had such a good year that I don’t want to rest on my laurels,” she says. “My left brain personality doesn’t want that and my right brain won’t allow me.”