Auraria is Avalanche Country! Check here to see what that means for CCD on Game Days.

Student Overcomes Depression and Finds a Home at CCD

“I knew I was going to face challenges because of my ethnicity and my parents not having money for college,” she says.

Still, she worked hard to maintain a 3.8 GPA at Eaglecrest High, staying in during free period to get extra help with math. But by the time she graduated in 2017, her motivation wavered.

“I was depressed and didn’t know why or where to turn,” she says.

She’d been accepted in the fashion program at Johnson & Wales University but it didn’t work out. She took a semester off, worked at Sam’s Club, and weighed educational alternatives. “I knew CCD was a good school and affordable and I wanted to be downtown,” she says.

De La O enrolled at CCD in Spring 2018 and found a volunteer position through her advisor Lynne Stefanowski that soon segued to work-study as a student ambassador. The job opened other opportunities including the position of representative in student government. But in the summer of 2018, depression returned when De La O, who classifies herself as pansexual, came out to her parents.

“I was still living with them and they are so conservative,” she says. “I was stressed out coming home knowing I was going to be verbally attacked. I felt trapped continuing to do things just to please them.”

At times forced to sleep in her car or stay with a cousin, De La O sought therapy from CCD’s Counseling Center. Her therapist Allison Sager helped her overcome her depression and become independent while providing ongoing support.

Encouraged by coworkers and mentors, De La O turned to CCD’s Office of Student Life and was directed to the student LGBTQ director, Steven Willich who helped her go to Financial Services to file for independence from her parents, enabling her to secure housing at Regency Student Housing.

“It was the best decision I ever made,” she says. “I moved out and didn’t have contact with my family. I suddenly had to figure out how to live independently, still dealing with my classes and organizations and working as an ambassador.” 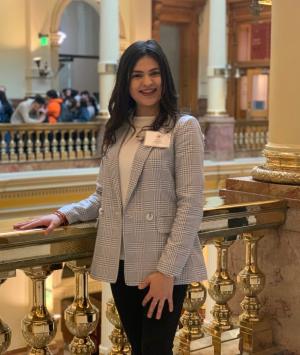 De La O continued to do well in college while becoming passionately involved in activist roles that helped her find intern and scholarship opportunities. In October 2019, she attended a Chicago conference for the Hispanic Association of Colleges and Universities (HACU), dedicated to improving post-secondary educational opportunities for Hispanic students.

A workshop she took at another community college helped her secure a volunteer position with Latinas Increasing Political Strength (LIPS), a leadership institute designed for Latinas by Latinas promoting the advancement of the Latinx community and advocating for reproductive justice. In February 2020, she attended the Latina Advocacy Day at the State Capitol to lobby senators about implementing more free counseling services for predominantly diverse K-12 schools and colleges.

De La O graduated in Spring 2020 with an associate’s degree in liberal arts and plans to attend Metro State University to earn a bachelor’s degree in international studies with a minor in gender sexuality/women’s studies. As a recipient of the Reisher Scholarship, she will receive a full ride to MSU Denver.

She’s grateful for mentors like Stefanowski and her student ambassador supervisor, Jordan Rodriguez, who supported her from the beginning. Kathryn Mahoney, Director of Student Life, helped De La O procure emergency aid to fix her car after an accident she had while working to qualify for financial independence and nominated her for the HACU conference.

De La O hopes to use her four-year degree to pursue a career in diplomacy. She credits CCD with helping her develop the courage to believe in herself and her future.

“They’re very good at making you feel like you belong, very family-oriented,” she says. “Going to CCD helped me become vulnerable, overcome my personal struggles, learn to speak up for myself and find the resources to reach my goals.”