While women in traditionally male-dominated fields—such as engineering, construction and other technical careers—can face societal hurdles, Community College of Denver (CCD) Engineering Graphics and Mechanical Design students Khadiyja “DJ” Lynch and Kelci Brady have both decided to break through that social stigma and find the right fit for their education and career goals.

DJ Lynch has never been a follower and describes herself as an “artistic renaissance woman.” At one time she considered becoming a fashion designer, but her mother suggested an architecture program instead because it was a more “financially realistic career.”

DJ took her mother’s advice and relocated to Colorado from Georgia and is now enrolled in the program learning how to work with 2D and 3D parametric software and prepare mechanical drawings. Eventually, she will learn to prepare drawings that work with 3D modeling software to produce prototypes and computer numerical-controlled machined parts.

“I started researching careers and income levels around the U.S.,” says DJ. “And Denver had lots of jobs with good starting salaries. I wanted to make sure that I was choosing a field where I would have a chance at a career, not just a job.” 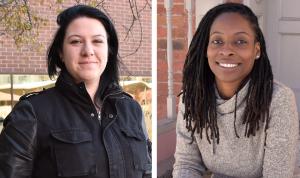 She plans to pursue a career as a mechanical drafter and is leaving the possibility open to transfer to a four-year school.

Kelci Brady has always loved anything mechanical and, after some searching, finally found the right fit in engineering graphics.

It was her father who suggested she use her math and artistic interests to pursue drafting. She enrolled in a more expensive technical college but it didn’t offer the option to transfer the credits she was earning to a four-year school.

Kelci was then introduced to CCD and, like DJ, found herself in Rick Glesner’s engineering graphics and mechanical design program—loving it.

“I’m really happy at CCD studying with Rick for many reasons, but one big reason is because he encourages people to do what they feel called to do and he treats everyone the same. I don’t think many girls know that these careers are a possibility for them,” Kelci says.

Now in her final semester, she is also working toward her pre-engineering line of studies so she can work as a mechanical engineer doing what she likes best, creating something from nothing using math and science.

Because CCD offers guaranteed transfer agreements to two- and four-year schools, both students have many options should they choose to enroll in a four-year institution to further their education.

CCD’s engineering graphic and mechanical design program offers basic and intermediate certificates as well as an Associate of Applied Science in mechanical drafting.