Community College of Denver (CCD) alumna Laura Phelps Rogers’ transition from a student pursuing a nursing degree to an accomplished and celebrated visual artist is one of life changing status. Recently named as one of this state’s 100 Colorado Creatives by Westword magazine, Phelps Rogers is the first CCD graduate to earn the distinction. She studied visual arts while at CCD and graduated in 2010 with her Associate of Arts (AA) degree.

“That is a game changer,” she says,” but it would not have happened without the encouragement of Charles (Parson) and my other teachers.” She continued by saying, “I’m impressed by the caliber of the teachers and faculty at CCD. They are supportive and encourage you to follow your passions wherever they lead.” 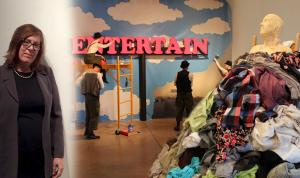 While devoting her time to fulfilling her pre-requirements for a nursing degree and taking elective art classes, CCD art professor Chuck Parson was blunt with her. “He told me this (art) is what I should be doing.”

Switching majors, Phelps Rogers looks back on the decision as a game changer.

“Charles is the perfect balance of emotional, creative and intellectual intensity, and he fires on all of those cylinders all the time,” Phelps Rogers says. “I’ve only met a few people like that in my entire life and it helped guide me to where I am now.”

Now an accomplished visual artist with her own studio and gallery in Denver’s RiNo District, Phelps Rogers engages in a full spectrum of artistic expression, from sculptural installations, site specific work and creating environments; to mixed media, photography and performance art.

She is also becoming better known to the Denver art scene by displaying her work both locally and abroad. Her 2013 Nipple Quilt is featured in the foyer of the Anschutz Medical Campus at the Center for Bioethics and Humanities. More recently, she completed a four-story installation for Metro West Housing Solutions as part of an active staircase project. Furthermore, she is represented internationally as far away as the Talsi Regional Museum in Latvia. Currently, you can see her work on exhibit at Arvada Center’s “Fired” exhibit and the Women’s Art Caucus’ annual show at the Bemis Library.

Personal factors have also played into this evolution as she reassesses the balance in her life. Her parents had passed away and, facing her own mortality, she began to realize how quickly time flies and how little time you have to be truly happy.

Her art reflects that philosophy.

For example, her recent exhibit “Family Matters” reflected her change in priorities and echoed a decision to leave things behind that were strained and no longer bring her joy.

“My work is a hybrid of my past, my grandmother’s, her mother’s, my mother’s and my life as I know it. I believe women respond to my work by connecting to the social and cultural constructs I weave into my work.”

Phelps Rogers’ next chapter will include finalizing her "100 Iron Maidens" into a large public work, and the expansion of her studio/gallery.

Most importantly, she will continue to follow her passion regardless of practicality.

“If I had adhered to what was entirely practical in my life,” she said, “I wouldn’t not be who I am today.”