“Your health is your first wealth” is how the saying goes.

As a teenager, Ridener once suffered from a congenital lymphatic disorder and spent weeks in a California hospital as a pediatric patient. But what could have been an excruciating ordeal of multiple surgeries, recurring symptoms and experimental treatments, was made bearable with the care of several extraordinary nurses who stayed by her side. 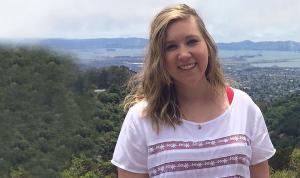 “They were incredible,” Ridener says. “They worked alongside the doctors to get me through a really rough time in my life, and I'll never forget how they inspired me to hang in there while I was in and out of the hospital. The doctors treated me, but the nurses healed me.”

And she hasn't forgotten. In fact, Ridener was so inspired by the care she received, she decided to follow in their footsteps and become a nurse herself. Years later, she's staying true to that promise.

Not only is Ridener studying nursing through CCD's Integrated Nursing Pathways program, she has been awarded the prestigious 2015 Coca-Cola "Leaders of Promise” scholarship from the Coca-Cola Scholars Foundation.

The scholarship is designed to provide new Phi Theta Kappa members such as Ridener with financial resources to help defray educational expenses while enrolled in a two-year college, while also encouraging participation in Society programs.

A panel of independent judges selected Ridener from more than 1,100 applicants, awarding her a $1,000 scholarship. The Leaders of Promise Scholars are selected based on outstanding academic achievement and demonstrated leadership potential.

"I'm very happy about it, and quite surprised," says Ridener. "I was shocked to have been selected, but my mom wasn't. She has always had faith in me and knows how badly I want to become a nurse."

Ridener is part of CCD’s Integrated Nursing Pathways (INP) program, a partnership between several Colorado Community College System schools and the University of Colorado Denver’s (UCD) School of Nursing. She has been accepted into this competitive admissions program at CCD and her journey will take her from her Associate of General Studies degree (earned at CCD) straight into the UCD School of Nursing this summer.

The goals of CCD’s INP program are to increase the number of baccalaureate-prepared nurses, enhance the diversity in the nursing profession, create a seamless progression to BS in nursing and provide students with an early introduction to the profession of nursing in the context of quality and safety, which better educates students about the profession.

"It's kicking my butt because it's very rigorous, but it's okay because I'm super passionate about nursing. I can’t wait to help others the way I’ve been helped.”

Ridener hasn't decided what area of nursing she wants to pursue yet.

"I'm thinking about oncology, but no matter which field I go into, I will never be bored in this career."