Community College of Denver (CCD) student Chelsea Situmeang has her eye on the White House. Well, sort of.

Recently selected as an E3! Ambassador for the 2015-2016 White House Initiative on Asian Americans and Pacific Islanders Program (AAPI), Situmeang will soon be headed to Seattle, Washington where the Initiative’s AAPI office is located.

Situmeang works at CCD's call center for enrollment services and also serves as an Asian student representative at the University of Denver’s Educational Opportunity Program. 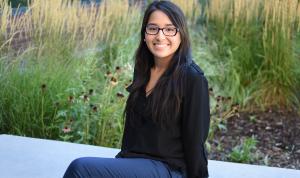 She competed with other candidates in the Rocky Mountain region for this prestigious academic honor, and was one of only two selected from this region, and only 23 nationwide.

The E3! Ambassadors Program is a youth engagement program that aims to educate, engage, and empower young leaders to increase awareness around critical issues facing the Asian American and Pacific Islanders (AAPI) community and to highlight key federal programs and resources in which AAPIs may be underserved.

“I’m honored and excited to have been selected,” she says. “It was a very rigorous application process and I’m very grateful to Jeffery Almeda, a previous E3! Ambassador to the program, who mentored me through it all.”

Situmeang, a transfer student from the University of Colorado at Denver (“their tuition was too high”), is pursuing an Associate of Science degree with her eye on a four-year degree in public health.

And as if the stars were aligned, her ambassadorship requires that she be committed to improving the quality of life and opportunities for AAPIs, which is exactly what she intends to do.

“I’m particularly interested in mental health issues because the subject is hardly discussed in the Asian community,” she says. “The rate of suicide among Chinese American women is ten times higher than white women, but the stigma of mental illness isolates them and prevents them from getting help, so I want to start that dialogue.”

As part of her duties as an ambassador, Situmeang will convene a community of thought leaders on issues surrounding mental health in the Asian American community through various events during the school year.

Others issues that she will address throughout the year will include education, pathways to public service and immigration.

And if this wasn’t enough, Situmeang has also been appointed to the CCD Student Advisory Board for CCD's vice president of Enrollment Administration and Student Success.

As Herculean as these tasks may appear, Situmeang has her own fan club - her family - behind her to cheer her on, especially since she is the first in her family to go to college.

Her parents, who immigrated to the U.S. from Jakarta, Indonesia, always knew she would do great things. In fact, Situmeang’s father relocated the family from California because of Colorado’s educational opportunities.

“My parents had no doubt that I would get into the program because they support me and believe in me, know who I am, and know I can set goals and achieve them.”

With an enormous, but admirable roster of tasks before her, Situmeang has her own superstar to admire.

“My mom has always been there for me every step of the way,” says Situmeang. “I’ve had health difficulties and other obstacles to overcome throughout this journey, but she has always encouraged me to hang in there and stay the course. She’s my hero.”