“We’re so focused on our own privileges instead of how we can even the scales for others,” says Robert Mastronardi, 34, a student at Community College of Denver (CCD). “I want to be an inspiration to people, to lift them up and empower them. I have to do the best I can so that when I do leave this world, I’m satisfied with my performance.” 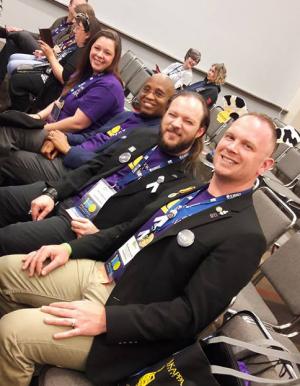 It’s an early fall morning and Mastronardi, as president of the Phi Theta Kappa (PTK) Honor Society chapter at CCD, is headed to Fall Fest, the campus’ annual showcase of clubs and organizations. He’s manning the PTK tent, where he will be in his prime, reaching out and influencing students to achieve their academic potential.

A champion for diversity, immigration, equal rights and intelligent debate, Mastronardi is a rising star, especially in the political world, where in 2016 he was voted a Colorado state delegate for the Bernie Sanders campaign.

The fact that Mastronardi is even here at all is an impressive, if not unbelievable feat. By his own account, he shouldn’t be alive.

A Lifetime of Challenges Before Age 30

Mastronardi grew up in Virginia with his mom and half-sister. He had difficulty coming of age — when he realized he was gay, his peers did not treat him well.

Overwhelmed by the challenges of high school, Mastronardi flunked out of 10th grade. He ran away from home at 16, following a boyfriend to Colorado Springs. As an adult, he settled in Denver, where he succeeded in retail and restaurants, working his way up to management.

Then, at age 23, Mastronardi was diagnosed with AIDS. He became gravely ill with pneumonia and liver failure. In critical care for a month, it looked like his end was near.

Facing his mortality, Mastronardi regretted that he hadn’t done or given enough. He made a promise to himself then and there: if by some miracle he got out of this alive, he was going to do more.

Somehow, Mastronardi recovered. He overcame pneumonia and liver failure, and a year later, so few copies of the virus were present in his blood that modern monitoring tests were (and still are) unable to detect them.

He was a medical marvel, a mystery to his doctors, and he saw this as his second chance. A few years later, he obtained his GED at CCD and then, in 2016, he enrolled as a college student.

A Voice for Immigration

Mastronardi excelled in college. His professor, Nicholas Morris, the PTK faculty advisor, noticed his academic performance and aptitude for leadership and suggested he join PTK, a national honor society that requires a minimum 3.5-grade point average. (Mastronardi has maintained a 4.0.)

“In PTK, we try to encourage all of our members to develop themselves,” Mastronardi says. “We’ve had so many officers come in who were immigrants, or who came from troubled pasts; there were a lot of single moms. Here, they could explore their talents and skills and develop themselves.”

Under Mastronardi’s leadership, PTK took on a two-year project called Honors in Action, where he is researching immigration through research and community service.

“I wanted to understand the complexities of immigration, the historical relevancy and how it applies to today’s issues,” he says. “The Auraria Campus is an amazing campus to do this.”

Inspired by student groups and activist rallies, Mastronardi is planning a day-long immigration seminar in the spring. He will invite community non-profits, will have speakers discuss immigration and will offer access to new immigration resources.

He also is leading the creation of an immigration-themed mural in CCD’s Cherry Creek building.

“It’s about people seeking a better education, and knowing they have a home here,” Mastronardi says. “We hope it will stay there for decades.”

“When you can see the world as it is and you are fully knowledgeable of your potential and how it can serve the world, how can you turn your back?” he asks. “Thanks to CCD and the Auraria Campus, I’ve learned that I’ve got to use my white, male privilege to work for others.”

Mastronardi plans to graduate from CCD with an Associate of Arts in communication in December 2018. He will enter the workforce and either join a political campaign or will continue to advocate for immigration issues.