Micheal Smith didn’t know how to go to college.

“I was kind of lost,” he remembers. Smith had been accepted to a Denver-area college but missed enrollment deadlines and didn’t understand the payment process. “I just didn’t know how to go about doing it. I didn’t have the resources in front of me to know what to do.”

After graduating from a Lakewood high school, Smith was living with a friend and his family. His friend’s mom pushed them to enroll in Community College of Denver (CCD).

“CCD made it really easy for me to go to their school; it wasn’t as hard as it was supposed to be,” Smith says. “Going there was really fun and it was really cool to have agency over the kind of stuff I wanted to do.”

After trying out math and accounting, and finding he wasn’t passionate about them, Smith signed up for an acting class. Smith had been in chorus and theater during middle and high school and remembered enjoying it, but had never seriously considered it as a career.

Once he joined the acting class he “fell in love with it,” Smith says. He took classes such as Acting II, which taught movement based on viewpoints. The theater program grew over the four years Smith was a student, offering more experiences and performances.

“It was absolutely wonderful,” he says.

In the summer just before Smith’s fourth year, CCD sent a group of theater students to attend a regional offering of the Kennedy Center American College Theater Festival (KCACTF).

The festival heralds from the Kennedy Center in Washington, D.C., bringing students together from nearly 700 schools throughout eight American regions. Students network among other schools, take classes from theater’s greatest masters, perform, and audition for a variety of roles.

“You get exposed to incredible new work,” Smith says. “It’s a really great space for college students to share and celebrate theater.”

KCACTF turned out to be a fruitful experience for Smith; he caught the attention of the delegation from the University of Idaho and was soon recruited to join their undergraduate theater program.

Smith transferred to the university in his fourth year — a seamless process — and graduated with a Bachelor of Fine Arts in 2015.

Auditioning for the Blue Man Group 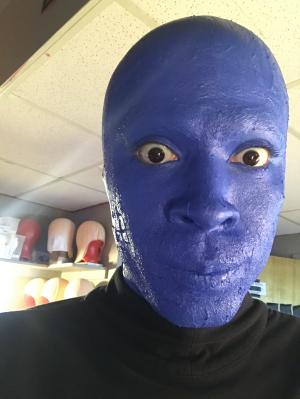 A year after graduating, Smith moved to Chicago. On a whim, he followed his friend to an audition for the Blue Man Group.

“I had no idea who they were or what it was,” Smith laughs, explaining how he improvised his way through the audition. “I didn’t really think anything would come out of it.”

But Smith impressed the panel and kept getting called back. Eventually, he made it through to a year-long training program.

Now, he is the “left” role in Chicago’s Blue Man Group and is learning the other roles as well.

“It’s a really wonderful, sensory overload-type of show,” Smith says. “It’s simple storytelling. It gives all of us a chance to explore our own interpretation of the character, which is really cool. I feel like my voice is being heard.”

Smith looks back on his academic career at CCD as transformative.

“I think they really gave me a chance to take my time to figure out what I wanted to do,” Smith says. “It was really nice to go somewhere where it felt like they accepted me; they let me go there with their arms open.”