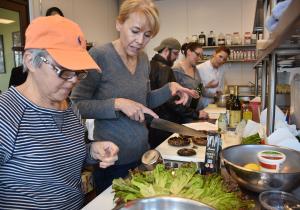 What do you do at CCD?

I am an adjunct instructor of nutrition and teach student how to value food and nutrition.

What do you enjoy most about your work?

I love the students and that I’m teaching them to eat healthy. I feel like my class will be one of the most applicable classes in their lives. I had food intolerances earlier in my life and was sick a lot. Naturopathic medicine helped me get better so I wound up going to school to become one. I was taught to value food and it my hope that I can pass on this same knowledge to my students.

When you’re not working, what do you do?

I see patients two days a week in Boulder and teach at CCD two days per week. Friday is catch up day and on the weekends I go hiking with my partner. He and I also like to go to the theatre and hang out together.

What moment at CCD stands out as the most memorable?

At the end of one of our first cooking classes when everyone sat around and was eating, each student shared what they got out of the workshop and the whole cooking processes. It was just one of those moments when you felt as through your heart was full.

There is something about preparing a meal together and then sitting down to share it. Students made comments that they had no idea they liked cauliflower, and that they couldn’t believe they felt so satisfied from eating just rabbit food! I just felt so heart full!

Who had the greatest influence on your education and/or career path, and why?

I have to say it’s a fellow naturopath, Carrie Louise Danell in Denver. She was treating me and I was in her office one day. I had been thinking about changing my career from being a CPA to a naturopath and was thinking that I couldn’t do it. She looked me square in the eye and said a lot of people tell me that they want to be a doctor, but you, you’re one of us.

I realized then that even though it was expensive and four years out of my life, I just had to do this, it’s my calling.

I’d have to say it was a friend of mine. I was studying to become a naturopath and was in my early 40’s at the time and I thought I was too old. My friend was 52 and had also considered changing her career but didn’t do it for the same reason. She said, now I’m 52 and doing the same thing. You are never too old!

Which three people (living or dead) would you invite to dinner, and why?

Oprah, because I want to find out how someone who should have been a statistic became Oprah. She had to change herself so much to become one of the most powerful and wealthiest women in the world and MLK, because he empowered people and cared about people’s character.

What or who can’t you live without?

My peace of mind. I like getting up in the morning and being able to center myself.

I would love to study research homeopathy and its relationship to quantum physics.