On November 5, 1962, during a speech at the University of Michigan, the Reverend Martin Luther King, Jr. passionately shared these words, “Let us realize the arc of the moral Universe is long, but it bends toward justice.”

These words were shared at a difficult time in our nation’s history. It was the time of the Cuban Missile Crisis with the fear of nuclear war foremost in the American psyche, and some might say we face many the same fears in our climate today.

While credit for these words goes to Dr. King, these same words were also shared by Colorado Speaker of the House Crisanta Duran during the annual Dr. Martin Luther King, Jr. celebration at St. Cajetan’s on January 18, 2018. 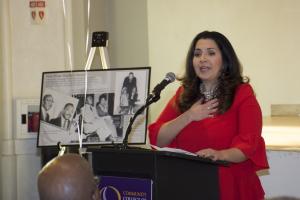 Speaker Duran received one of three MLK awards presented at the event: CCD Community Leader. During her career, she has paved the way for women in leadership roles by becoming the first Latina Speaker of the House. She spoke about the challenges facing diversity in our time and how she feels that she has to work harder, better and smarter to achieve and maintain the same success as others.

Speaker Duran has been a supporter of CCD and our students. She championed the ASSET bill that allowed undocumented students to receive in-state tuition and has supported our DACA students by attending campus events and rallies.

“People need a fair shot to succeed and it is our job to help them do that,” said Speaker Duran. “But we all have to have the courage to fight to get there.” 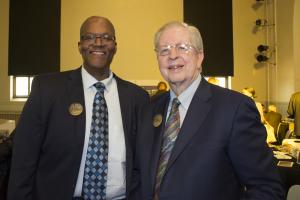 Dr. Byron McClenney, president of CCD from 1986-2000 and recipient of the CCD Champion award, was a trailblazer at CCD. He put CCD on the map nationally and understood that the president’s role was to represent the college out in the community, and that was something he did well. During his tenure, he made sure that the diversity of our staff and faculty matched that of our student population.

We were not talking about diversity in the early 90’s the way we are now; however, it was under his direction that CCD became a Hispanic Serving Institution and increased the number of graduates among people of color from 13 to 50 percent. 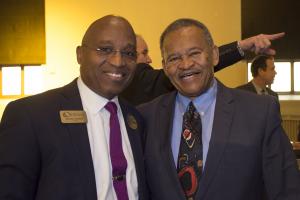 Dr. Paul Hamilton, an educator for 45 years, was awarded the CCD Living Legend award. He is a community activist, who has been a principal, college teacher and Colorado State Representative 1969-1973 (Five Points area). He made the decision to run for office the day before Dr. King was assassinated and served two terms as a state legislator.

Dr. Hamilton has an extensive African art and book collection. At the MLK event he spoke about the three areas in life where we should put our focus: on the care and concern for ourselves and our health first; then to focus on our heritage, which is the foundation for who we are; and lastly to support and maintain our community.

He charged each one of us to think about what action we can take today. It might be to exercise more or to forgive, or even to write a book, but he urged us to ask ourselves what is the one thing that we can do today to make the world a better place.

About the Annual Ceremony 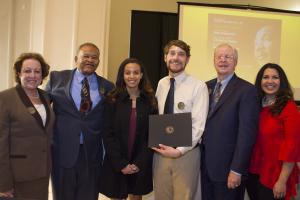 During the ceremony, CCD also proudly presented the 2018 Dr. MLK, Jr. Scholars, which recognized CCD students Aynalem Woldemariam and Thomas Bell, who are also leaders in their own right. This two-part scholarship will incentivize academic success by distributing half of the scholarship in the spring, and the other half upon completion and continued enrollment in the fall semester.

Special thanks to our event underwriters: Associated General Contractors and the CCD Foundation.

About the Award Recipients & Annual Ceremony

Despite growing up poor, Dr. Paul L. Hamilton was able to find a way to pay his way at University of Denver (DU). While at DU, he worked for civil rights with the Freedom Riders, traveled to Asia with the YMCA, and joined the Operation Crossroads Africa project.

Paul earned his B.A. and M.A. from the DU, and went on to earn his Ed.D. from the University of Northern Colorado. In 1964, he was hired as the first African-American teacher at Denver’s Lake Junior High, and he co-founded the Black Educators United group. He also served two terms as a state legislator, from 1969-1973, and was director of the Denver Power Learning System, helping hundreds of African Americans become business entrepreneurs.

He is a published author, and highly regarded life-action coach. Hamilton retired from education in 2014 to devote full-time attention to his African art collection. He currently serves on the Board of Directors for Red Line Contemporary Art Center.

At the age of 37, Speaker Crisanta Duran is in her fourth and final two-year term representing House District 5 in central Denver. In 2016, she was elected to be speaker of the Colorado House of Representatives, one of the top three positions in state government. She is the first Latina to hold the position. During her time in office, she has been a leader in economic development efforts, as well as chairwoman of the Joint Budget Committee.

Speaker Duran serves on the board of the National Association of Latino Elected & Appointed Officials and the national Board of Hispanic Caucus Chairs, and in 2016 was a featured speaker at the Democratic National Convention in Philadelphia. She is a sixth generation Coloradan with a law degree from the University of Colorado, where she was elected president of the Student Bar Association and the Latino Law Student Association.

Dr. Byron McClenney has completed 56 years as an educator, including nearly 33 years as a community college CEO, including 14 years as president of Community College of Denver. He has served as a consultant to institutions, state higher education systems, state governments, and professional associations in 47 states and internationally. He focused his career on student success, institutional effectiveness, leadership, strategic planning, and organizational transformation.

McClenney currently serves on the Colorado State Board for Community Colleges and Occupational Education and the Colorado Opportunity Scholarship Initiative.

December 20, 2019
From Delivering Pizza to Receiving a Bigger Slice of the Pie

November 18, 2019
CCD Science Students are Out of this World!