(Denver, CO) – Dr. Martin Luther King, Jr. exemplified community leadership and made it the cornerstone of his civil rights ministry. He inspired people to continue his work in their communities. In the spirit of Dr. King, Community College of Denver (CCD) honored three community leaders at its 10th annual MLK Day event.

Charleszine “Terry” Nelson, Sid Wilson and Magdalena Gallegos are among those 2020 honorees to be recognized on January 23th at St. Cajetan's Cathedral on the Auraria Campus. 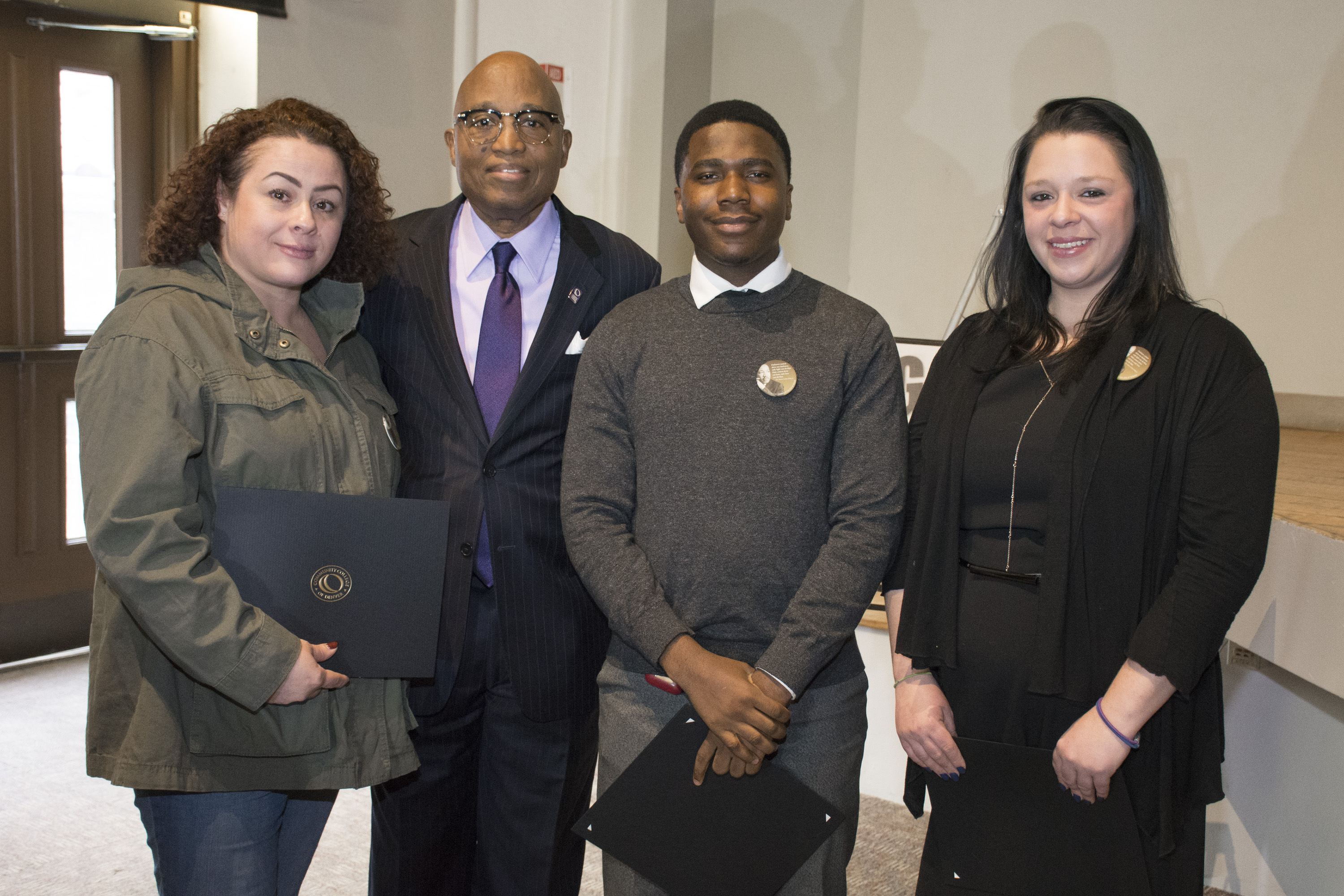 During the ceremony, CCD also proudly presented the 2020 Wellington Webb MLK Scholarships, which recognizes CCD students who are also leaders in their own right. This two-part scholarship incentivizes academic success by distributing half of the scholarship in the spring and the other half upon completion and/or continued enrollment in the fall semester.

This year’s recipients were Emanuel Walker, who is studying computer information systems and dreams of bringing solar panels to every village in Liberia; Kelly Shanley, who is pursuing a degree in communications; and Judit Tijero, who is studying criminal justice with the goal of being a probation officer. 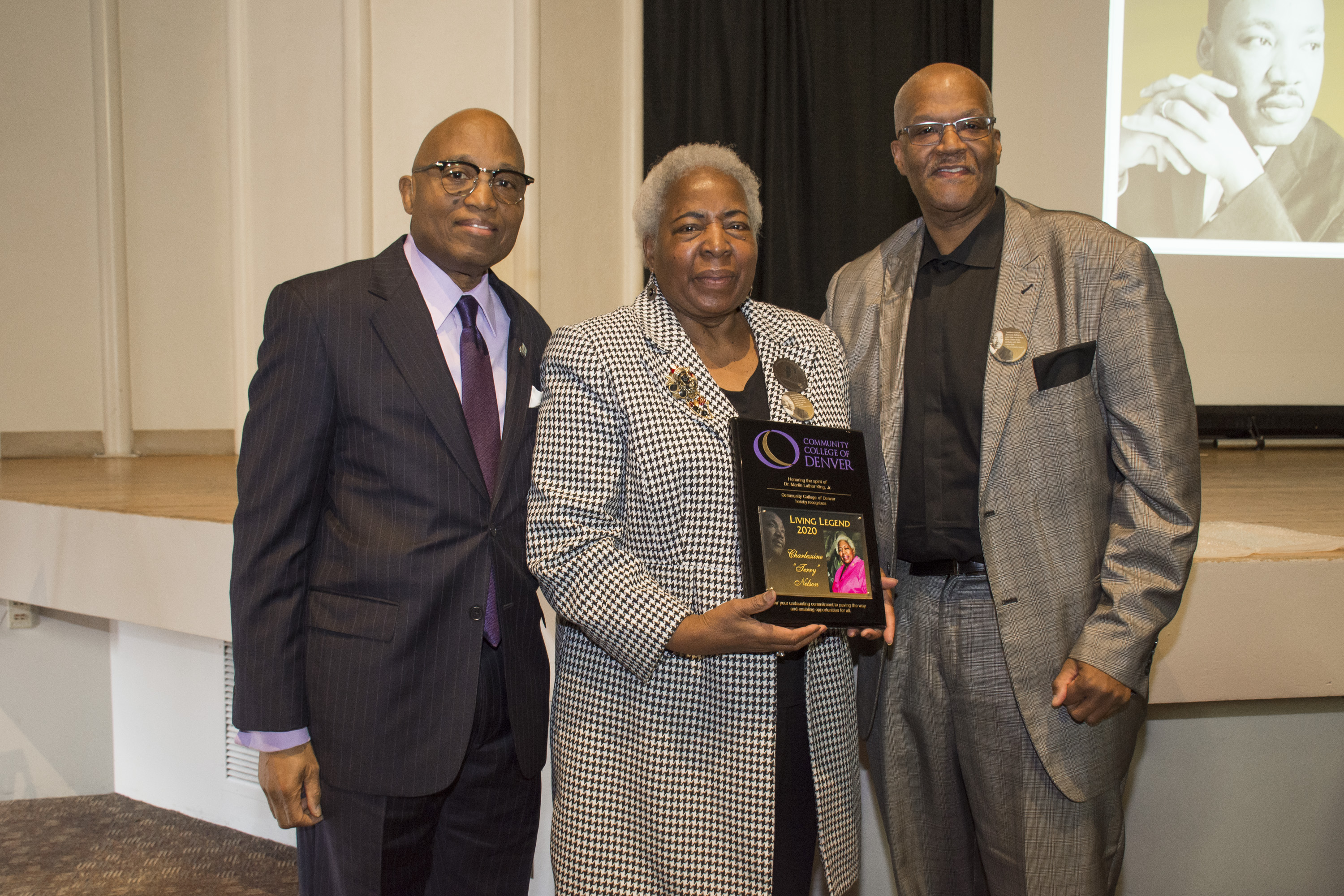 Charleszine “Terry” Nelson is a native, born and raised in Denver, Colorado.  She attended Denver Public Schools, from elementary through high school and graduated from Manual High School, received a Bachelor’s degree in Sociology and Psychology from the University of Colorado at Boulder and a Master’s degree in Information Technology and Library Science from Emporia State University.

Her career with the Denver Public Library spans more than 30 years, and in 2003, Nelson became the Denver Public Library’s first female African American Manager of Special Collection and Community Resources Development at Colorado's Blair-Caldwell African American Research Library. As a highly respected local expert on the Five Points District, she passionately shares the rich culture and stories of the corridor, and its community, from generation to generation. She is regularly sought out by local and national historians, institutions of education at all levels, topic experts, students, and media to share the colorful history of the Five Points District.

She has co-authored and contributed to numerous journals, manuals, books and films related to the history of Five Points and African American community members in the west. Further, she co-authored (with Bonnie F. McCune) the book, Recruiting and Managing Volunteers in Libraries, which has become a valuable manual for managers of volunteer programs throughout the nation.

Nelson has received numerous awards for her tireless efforts and was granted an honorary doctorate of humane letters from the Denver Institute of Urban Studies in 2016, for her topic expertise and commitment to knowledge sharing. Most recently she has been awarded the Jazz Journalist Association 2018 Jazz Hero Winner for the state of Colorado, Historic Denver’s Molly Brown Preservationist Award for 2018, and recognition as a pioneer in the field of historic documentation and archival processes, by Alpha Kappa Alpha Sorority Incorporated. 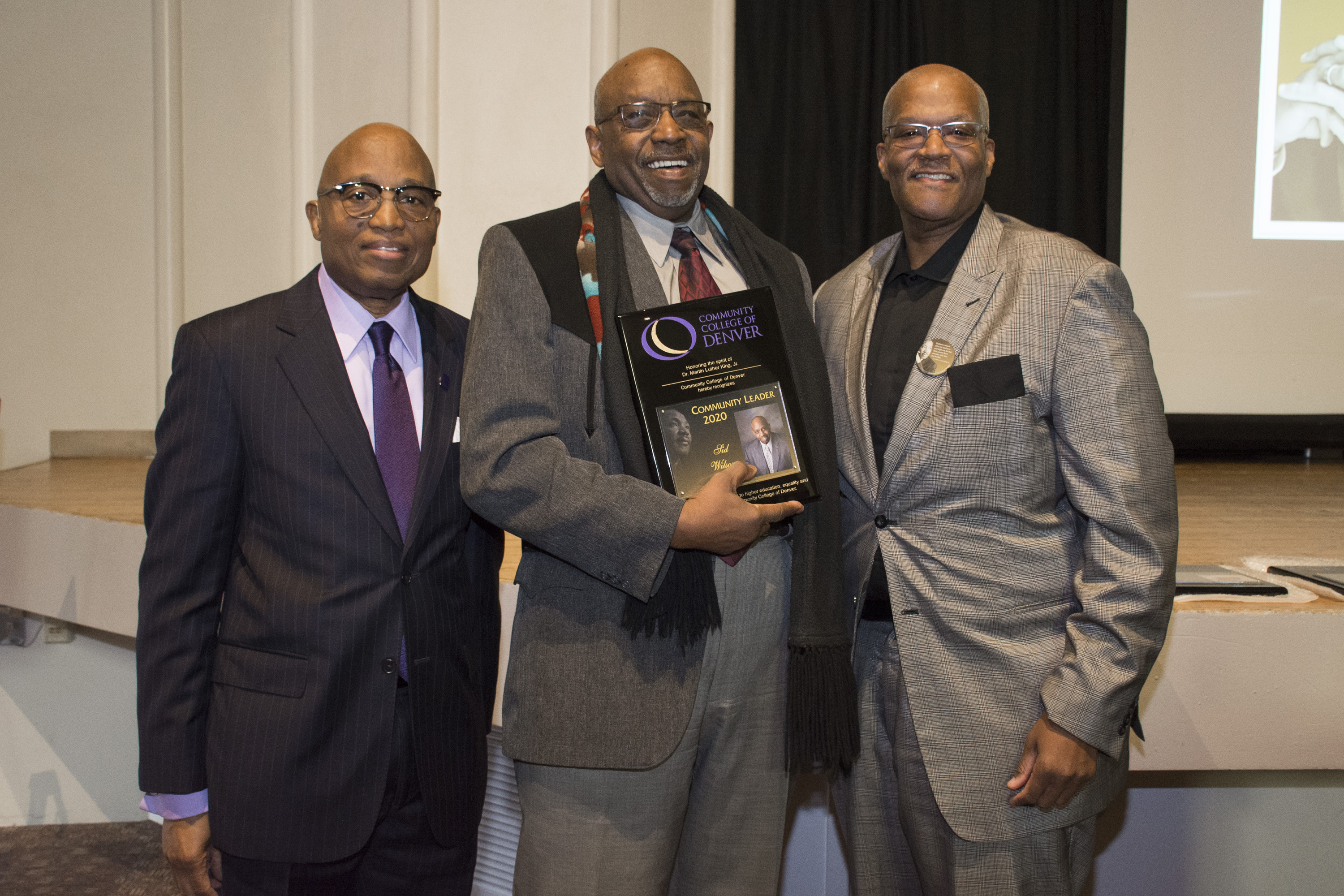 Wilson revels in sharing with clients the inspiring tales of Colorado's early pioneers whose resourcefulness enabled them to survive and prosper in the Rocky Mountain's volatile "boom" and "bust" economic cycles of the past. Like many of them, he turned a set back into a step forward when down-sizing at the Lockheed Martin Corp. ended his fourteen- year telecommunications department and project management career. With a partner, Wilson started A Private Guide, Inc., first transporting groups to Colorado's new casinos in the historic mining towns of Cripple Creek, Black Hawk, and Central City. Since then, he has been a prominent force in Colorado's tourism industry. In 2013, Wilson and A Private Guide, Inc. were inducted into The Denver & Colorado Travel Hall of Fame in recognition of his leadership, dedication, and professionalism and has made significant contributions to the travel industry in Denver and Colorado.

Wilson has served as a Denver Public Library Commissioner; former board chair for the National Academy Foundation's Academy of Hospitality & Tourism for Denver Public Schools; Past Chairman of the Board of directors for the Black American West Museum and Heritage Center; Director Emeritus for the Center of the American West at the University of Colorado Boulder, past vice-chair and board member of Historic Denver, Inc.; Founding member and past Board Chairman of the James P. Beckwourth Mountain Club; as a Commissioner on the Denver Mayor’s African American Commission; and serves as an instructor for the International Guide Academy for the US & Mexico regions.

He has also served on the board of directors for many organizations, including the Visit Denver/Convention and Visitors Bureau, the Denver Zoological Foundation, the Colorado Historical Society’s African American Advisory Council, the Historic Preservation State Review Board, the Colorado Scholarship Coalition.

Wilson, born in New York City, a graduate of the RCA Institute of Technology, is a decorated Vietnam War Veteran, married to his wife Claudia-Marie, and are the parents of two children, both of whom are college graduates. 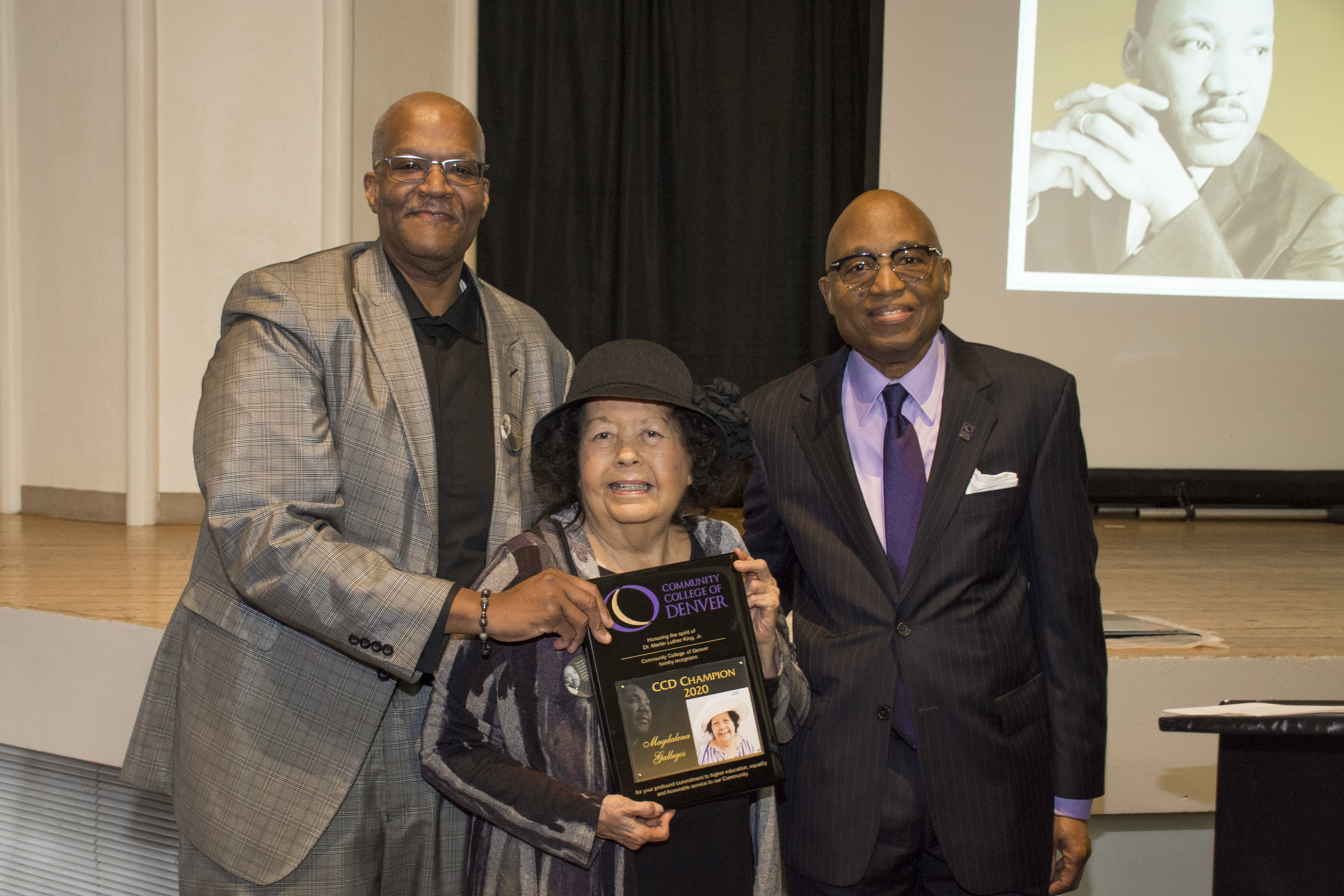 Magdalena Gallegos was born in Denver, Colorado in 1935. She was raised in the Auraria neighborhood back when it was known as the Westside of Denver. She received a traditional upbringing and a Catholic education at St. Cajetan's School on 9th and Lawrence Street. She married in 1955 and had four children who also attended St. Cajetan's School. In 1975, Gallegos divorced and became a single parent, raising her two youngest children by herself. Even though it was a struggle, she decided to pursue her life-long dream of attaining a college degree.

Gallegos enrolled at the University of Colorado Denver (UC Denver) on the Auraria College Campus in August of 1980. At the end of her freshman year, her GPA was 4.0. She kept her high GPA all through her four years at UCD.

In 1984, Gallegos received her Bachelor of Arts Degree with Distinction from UC Denver. After Gallegos graduated she was hired as a College Counselor at the Educational Opportunity Center on the Auraria College Campus. She retired in 2004.

Obtaining an undergraduate degree opened up many opportunities for Gallegos. In 1981, she enrolled in an oral history class and wrote a research paper on former residents of Auraria. Four generations of her family lived at 943 ½ 10th Street starting with her grandmother Lucy Torres in 1929. Her parents, Felix & Florence Torres-Gallegos lived there after they married from 1933 to 1954. Magdalena returned to her birth home in 1955 after she was married, and her firstborn twins lived at the same address from 1955 to 1965. Because of this history, her research paper became a personal project.

In 1984, a UC Denver history professor, Tom Noel, took an interest in her writing and research of former Aurarians and he introduced her to the editor of Colorado Heritage Magazine. In 1985, she published her first major work as a writer when Colorado Heritage Magazine dedicated the magazine to her work on Auraria. With St. Cajetan's Church on the cover, the story, "The Forgotten Community: Hispanic Auraria in the Twentieth Century" became the first publication to highlight Mexican ­American/Chicano life in Auraria and Colorado.

Her historical piece covered fifty years of Hispanic community life up until the community was displaced to make room for the Auraria Higher Education Complex in the 1970s. With this publication, Gallegos began her career as a writer and author.

In 1991, Gallegos and her husband, John O. Mitchell, Sr. began to publish their own magazine, Southwest Magazine. The magazine's format focused on four ethnic populations which included; Hispanic/Chicano; African American; Native American and Asian stories and culture. The magazine was highly successful and many people were involved in its concept and production.

Gallegos' husband John became ill and died in 1999 and Gallegos was not able to continue to publish the magazine.

In 1999, Gallegos' writings and publications came to the attention of Dr. David Conde, Metropolitan State University of Denver (MSU). He submitted all of her published works to Broccoli Clark Layman, Inc. In 2000, her work was included in the Dictionary of Literary Biography, volume 209, Chicano Writers, Third Series, edited by Francisco A. Lomeli and Carl R. Shirley.

In the introduction by Dr. David Conde, all her published articles, stories, reviews, Hispanic histories, national and local articles up to 2000 are included in this Biography.

In the year 2003, Gallegos wrote and produced her first play, SUENOS. It was first performed at El Centro Su Teatro in Denver and was produced a second time in Aurora, CO, for a fundraiser for the Nunez Foundation.

After retiring from Community College of Denver in 2004, Gallegos continued her writing career for El Semanario Community Newspaper where she was hired as a reporter in 2005.

In 2006, Magdalena was diagnosed with breast cancer. Surgery removed the cancer, chemotherapy, and radiation came next. Magdalena started writing again for El Semanario in 2007. El Semanario blessed Magdalena with her own column in 20 I 0. Her column, "Straight from My Heart," gave Magdalena another avenue for her writing.

In her younger days, Magdalena Gallegos was a musician and played classical piano. She began playing the organ at St. Cajetan's Church when she was thirteen years old. She played every Sunday for High Mass and she played for weddings and funerals for over twenty years.