(Denver, CO) Dr. Ryan Ross, will tell you himself - he should not be alive. In fact, as a child, he figured he would be happy making it to Disney World just once in his lifetime. Today, Ross’s life feels like a fairy tale to him.

“I had an intense and humbling childhood,” he says. “I could not have envisioned the life I have today back then." 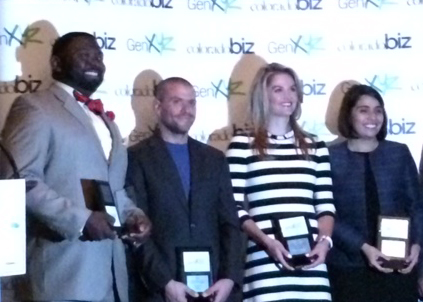 Colorado Biz magazine has named Ross, Dean of Student Development and Retention at the Community College of Denver (CCD), one of 2014’s Top 25 Most Influential Young Professionals. He will be recognized at 5th Annual GenXYZ Awards Event on Oct 2nd at Mile High Station.

A far cry from the gang warfare, abusive childhood, and hopeless outlook of a child growing up in Denver’s Five Points neighborhood during the notorious “Summer of Violence” in 1993.

The second of six children, Ross was constantly targeted for recruitment by gang members. He also endured “a pair of bad stepfathers” who brought abuse and violence into the home, and witnessed drive-by shootings on a regular basis.

Having caught wind of a stellar football program at Mullen High School, Ross began catching the bus to Mullen every day, introducing himself to the school’s administrators and asking if he could sweep floors in exchange for enrolling, all in an effort to escape his every day environment.

His efforts paid off when he received a full scholarship that would allow him to attend.

It was the beginning of an upward trajectory that landed Ross a spot on Mullen’s football team, a regular role performing community service, and ultimately, a seat at Nebraska Wesleyan University, where he graduated with a B.A. in Psychology. He went on to earn his Master’s degree from Colorado State University and his Ph.D. from the University of Colorado at Denver.

After returning to Denver from Nebraska in 2002, Ross briefly worked for the Department of Corrections, followed by a stint as a counselor with Denver Kids, Inc., and was soon recruited by CCD as a counselor for the TRIO Educational Opportunity Center.

Since then, Ross has become CCD’s Dean of Student Development and Retention, which allows him to steer youths toward college, keep them there through graduation and find their own success in the community. He also was influential in creating CCD’s Urban Male Initiative (UMI), a program designed to help young men attend CCD and succeed with specialized programming and additional resources.

“My family life is where I get the most joy,” he says. “My biggest reward is life with my wife Simone, our five year-old son, Gavin, and looking forward to our second child in November.”

He’s also grateful to have taken his family to Disney World for the first time just this past month.

Community College of Denver (CCD) is a leading point of entry to higher education for the City and County of Denver. CCD provides a cost effective, high-quality college education, along with access and opportunity for non-traditional students, workforce development, training resources for local organizations, and community partnerships.