Her Life’s Purpose Born from Tragedy

Baghdad native Ola AlSaadi doesn’t remember much about her father before he lost his hand fighting the war in Iraq. She only remembers what it was like after.

“He stayed away from everything,” she says. “It didn’t just affect him; it affected my whole family.”

In their home, her father displayed a bronze medal he’d won years ago in a shot-put competition—a remnant of the man he used to be. Ola noticed this too in the numerous men and women who’d lost limbs in the war; after the injury, they became a shell of who they were before.

Because of the war, Iraqis didn’t have access to modern prosthetics, making it difficult for victims to overcome their injuries, both physically and psychologically.

Ola was determined to change that.

At first, she dreamed of becoming a doctor, but couldn’t go to medical school in Iraq. The country was declining. 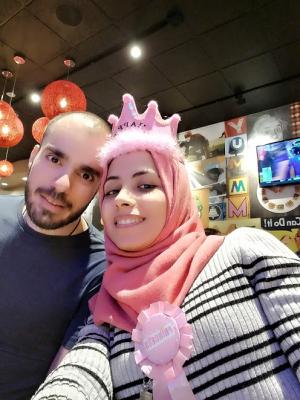 Ola and her husband, Ali Alalwia, left Iraq in 2012, in search of a safer life and better future. They emigrated to the United States, eventually settling in Denver.

“When we moved, we literally started from zero,” Ola remembers. “No money, no jobs. We came with nothing.”

The first year was hard on her. Ali, who had a job with the U.S. National Guard Reserves and also worked as a security guard, adapted to the culture faster than Ola. For almost a year, she stayed home alone every day, which was difficult for someone accustomed to having her large family around. Afraid to speak the minimal English she knew, she talked to no one but Ali for the first year.

Eventually, she got a job in a coffee shop. One day, a customer asked her where she went to school.

“Nowhere,” she said. “Can I even go to school here?” Ola assumed that, with her broken English and few financial resources, she couldn’t go to college in the U.S.

“Come see me at my office,” the customer said. He worked for the Denver Scholarship Foundation.

Ola took him up on his offer, and he immediately connected her to Imane Benjelloun from Community College of Denver (CCD).

Imane had Ola take a qualifying exam; once Ola passed, Imane enrolled her in Summer Bridge, a free, two-week program that prepares students for college. Then she led Ola through scholarship applications.

“I had been lost and didn’t know what to do,” Ola says. “Imane gave me her phone number and told me to text or call whenever I needed help.”

Ola started at CCD in fall 2015, having secured the Francie Anhut Scholarship, the Excellence Scholarship, and the Denver Foundation Scholarship, as well as a work-study position with TRIO Student Support Services.

Finding a Home at CCD

Now Ola had the chance to pursue her dream of helping victims of war. At CCD, she could earn an Associate of Science degree, which would propel her into the bioengineering program at University of Colorado Denver. There, she could learn the latest advances in prosthetics and 3-D printing and bring them to people who’d lost limbs in wars.

Never losing sight of this mission, Ola grew more confident every day, surrounded by students who were also learning English. She made friends fast, connecting with people who, like her, looked and sounded different, having immigrated from all over the world.

“CCD feels like home,” she says. “As a Muslim woman who wears a hijab, no one will judge. Here, I never had a bad experience being a Muslim.”

“You can find a lot of people who really care about you. Whenever I see my former professors, they will ask how I’m doing,” she says. “Whenever you email anybody here, they will respond. They make me feel important.”

An Education Milestone in Ola’s Family

This spring, Ola will graduate with an Associate of Science degree. She will be the first person in her family to graduate from college.

Her two biggest cheerleaders are Ali, who brings her cake and flowers when she is stressed, and her mother, who says prayers over the phone to Ola before every exam.

“I haven’t seen my family for six years,” Ola says. “It’s very hard to be away from home, away from your family. Going here at CCD, meeting a lot of people, gave me that feeling that I can do it. There is not a word that can express how grateful I am.”

“I feel like I’m a different person,” she says, her eyes bright and smile wide. “I used to have a low self-esteem. I wouldn’t speak. Now, I can’t keep my mouth closed.”