Angelica Vasquez is a busy mom of three girls and has always loved to cook, a skill she also wants her children to learn.

“I think it’s good to know how to cook, but it’s just as important to learn how to cook food that is nutritious,” said Angelica. “My mom died at 58 from cancer so I want my children to know about good nutrition.” 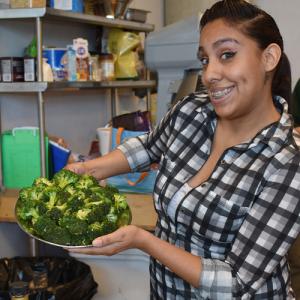 Angelica is one of several students at Community College of Denver (CCD) who has enrolled in a pilot Human Nutrition class, HWE100. This section is unique because students take what they learn about the science of nutrition and put it into practice in a hands-on skills lab.

As part of this course, students participate in two nutrition skills labs during the semester where they spend several hours at the Osage Cafe with Chef Shellie Kark, learning how to transform a recipe into a tasty, healthy meal.

“Anyone can duplicate a recipe,” said Kark. “The goal of this program is to instill students with a skill and hopefully inspire them to want to teach it and share it with someone else.”

The pilot, which rolled out last spring, helps bridge the gap between having vegetables in the fridge and knowing how to prepare them so they taste flavorful. Now the college is preparing to take the pilot across all of CCD’s nutrition classes.

Dr. Cheryl King is a Boulder Naturopath who teaches the class for CCD. She and Chef Shellie are the creators behind the lab, which came out of a passion for food and a desire to help students understand the connection between the science they learn in class and cooking and eating healthier food.

“There’s more to vegetables than just carrot sticks,” said Dr. King. “The class was set up as a lecture format and students learned about the basics of vitamins, vegetables, proteins but there was no forum for them to put into practice what they were learning.”

Many of the students in Dr. King’s class share this same passion for food. While several are nursing students, the class is also made up of a handful of students from other programs.

Josh Bush is a business major and nutrition minor at CCD. He wants to open up his own gym and teach people about both exercise and nutrition; this class will give him the knowledge to help others know what to eat and how to prepare it.

“Many times students are told to eat more vegetables but they don’t know how to cook them,” said Dr. King. “They know how to put a burrito in the microwave and that’s about it. Students try to cook vegetables and don’t know how so what they cook tastes gross and they won’t eat them again. This hands on cooking lab gives students the confidence to create something delicious and healthy.”

During the skills lab portion of the class, CCD students Doug and Olivia spend the afternoon preparing Chef Shellie’s “Rubbed Kale Salad with Roasted Beets and Feta-Cumin Vinaigrette.” As Doug skeptically chops the kale, he comments that he’s never eaten it before but that he’s open to trying it.

Chef Shellie has created each of the recipes herself and actively engages with each student during the lab. As she glides around the kitchen spending one-on-one time with each student, she stresses that it’s not just about chopping and cutting. She also gives them tidbits of information as they go along.

“Who here knows what a goji berry is?” Chef Shellie asks with a wide smile. While she is met with many blank stares, one student asks if it’s related to a raisin. As she holds out a package of the berries for each of the students to try, aromatic smells begin to fill the room and a level of excitement and nervousness starts to build around the anticipation of trying the dishes the students have been preparing all afternoon.

Later, after all of the dishes are ready, students sit in the café and share each dish family style with Chef Shellie and Dr. King. Chef Shellie asks students what he or she has learned and each one offers their experience.

Doug comments that kale wasn’t as bad as he thought it would be, and when it is Angelica Vasquez’s turn to share her thoughts, her face immediately lights up with a smile and she says, “I never knew I liked radishes so much!”

CCD’s Human Nutrition HWE 100 class can be taken as part of an Associate of Science degree or as a general studies course. CCD has an articulation agreement in nutrition with Metro State University that allows students to transfer with an Associate’s degree and work towards completing the bachelor’s degree in nutrition. Learn more at CCD.edu/Nutrition.