Auraria is Avalanche Country! Check here to see what that means for CCD on Game Days.

CCD students, Lexus Porter and Angelica Prisciliano received awards for their contributions for their college activities and community service. Students are nominated and selected by their peers.

Lexus’s peers remarked that she “is an amazing young woman who works to create a positive experience for her fellow students, stands out among her peers’ and is a shining example to all students.”

Angelica also serves as a member of CCD’s SGA, is the president of DREAMers United, a student advocacy group that works on behalf of undocumented students, and acts as secretary of a similar student group “Keeping the Dream Alive.” She also serves on various committees around campus.

Angelica’s peers commented that she “constantly challenges herself and has great passion to help those around her excel. She also acts as a volunteer and peer mentor to help her fellow students succeed.”

"Both of these students are just so cool,” said Dr. Everette Freeman, president of CCD. “Angelica is going to take the world by storm as an attorney and Lexus will be undertaking a career in bio medical research. I have no doubt that they will both make tremendous contributions in their chosen fields.”

President of the Year

Dr. Everette Freeman was nominated as President of the Year by CCD’s Urban Male Initiative (UMI), an organization that provides support and leadership development opportunities for male students willing to commit to service. The organization recognized Dr. Freemen for his dedication and leadership toward advancing student interests, celebrating him for his accessibility and being such a strong role model. 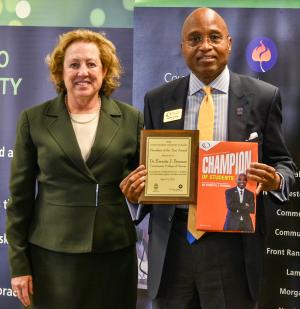 “Everette” as he prefers to be called by staff and students is regularly visible at many daily and special events around campus and also has an open door policy where he regularly meets with students to help or inspire them. He also invites them to “sit in the president’s chair” so they too can realize that one day they can be president of a large institution.

“The recognition really reflects of the character and quality of the faculty, staff and students at CCD,” said Dr. Freeman. “They are the best of the best anywhere and I am proud to accept this honor on their behalf.”